skip to main | skip to sidebar

Back in the groove

Finally, Mr. Mr. is back to school.  Usually the program he attends in the summer is off for two weeks in the beginning and two weeks in the end, but this year the calendar was off skewed so he actually had one week off in the beginning and three weeks off in the end.  Then of course Irene came, and this made a huge mess of his school.  Sparing you the details, lets just say something smelled funny!  So four full weeks of no program and we both were about at our wits end! 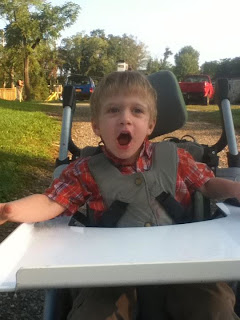 Tuesday off he went full of smiles and happy feet!  I can't believe how fast he is growing and that this will be his last year at the school he is in and then we have to make some decisions about his kindergarten schooling!

I'm so happy that he keeps his teacher from last year who is young and energetic and AMAZING!  It truly takes special people to work with these children!

Progress reports for him is that he is now pushing himself up on his knees and elbows!  He is also drinking from a straw! I'm still battling what to do about him using his Binky, (which is only at night in his bed) and the whole baby food debate.  At what point is it not appropriate? As usual, I will allow him to dictate the transition!
Posted by Ambitions of a Trophy Wife at 5:23 AM 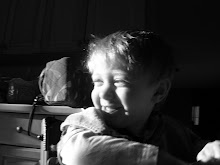 Ambitions of a Trophy Wife
I am a mother of three boys and one girl, my youngest son Walker is developmentally delayed with no diagnosis, I am divorced and re-married, living life as I never imagined. I may be cynical, but I try to see the world as it is.... no frills but plenty of laughs.